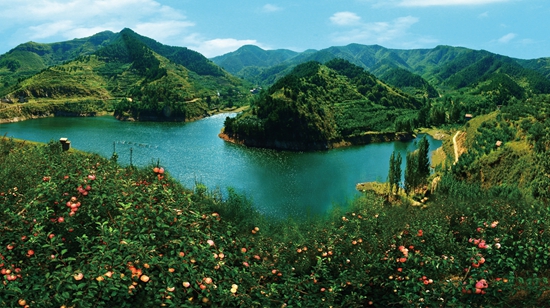 Located in the central part of Shandong Province, Zibo City administers 5 districts, 3 counties, Zibo National New & Hi-tech Industrial Development Zone, Zibo Economic Development Zone, and Wenchang Lake Tourist Resort. It is a unique group-type city with a total area of 5,965 square kilometers and 4,708 million permanent residents. In 2017, its regional GDP reached RMB 478.13 billion, achieving a general public budget income of RMB 36.16 billion, and the per capita disposable income of urban and rural residents reached RMB 39,410 and RMB 16,953 respectively. Zibo City has been included in the first batch of demonstration zones for the industrial transformation and upgrade of old industrial cities and resource-based cities. It has been identified as a pilot city for the agglomeration development of national strategic emerging industrial regions and a comprehensive pilot city for national new urbanization. Additionally, it has been included in the provincial comprehensive experimental zone for the transition to new from old economic engines. Zibo National New & Hi-tech Industrial Development Zone has been included in the National Independent Innovation Demonstration Zone in the Shandong Peninsula. Meanwhile, it has won multiple titles, including the National Civilized City, "Chang'an Cup", which is the greatest honor for national political and judicial comprehensive governance work, National Sanitary City, National Garden City, National Forest City, and so on.

I. Zibo has the advantages in industrial base.

Zibo is one of the earliest areas for industrial and mining development. Its modern industrial development has more than 100 years of history. It is a major production area of petrochemical and pharmaceutical products, as well as building materials in China. It is named City of Ceramics, City of New Materials, national-level new material achievement transformation and industrialization base, National Torch Program biomedical industry base, National Torch Program functional glass characteristic industrial base, national pump industry base, and national advanced ceramic industry base. In 2017, 2,978 industrial enterprises above designated size in Zibo achieved a revenue of RMB 1,105.96 billion from their main business. The electronic information industry is one of the fastest-growing industries in Zibo City. In 2017, the number of enterprises above designated size reached 105, and the main business revenue was RMB 39.84 billion.

II. Zibo has advantages in talent and technology.

Zibo is the first batch of pilot cities for science and technology in the country and a national-level Spark technology intensive area. It is an important scientific research base for silicate, chemical, metallurgy, silk, and medicine in Shandong Province. The city has 318 innovative laboratories such as key laboratories above the provincial level and enterprise technology centers (including 18 at the national level), 48 postdoctoral research platforms, and 87 academician workstations, all of which ranking in the forefront of the province. There are 31 experts of "The Recruitment Program of Global Experts", 15 experts of the "National Special Support Program for High-level Talents", 70 talents of the "Taishan Scholars Program of Shandong Province", over 1 million industrial workers and more than 400 thousand professional and technical personnel. Zibo has 10 provincial colleges and universities, including Shandong University of Technology and Zibo Vocational College (ranking 2nd in the national competitiveness evaluation of China's higher vocational colleges in 2017), with 132,700 students.

There are 26 enterprises and 28 stocks listed at home and abroad. Qilu Equity Exchange Center is one of the national key regional OTC markets. So far, 2,458 listed trading companies have been established in the city, with direct and indirect financing exceeding RMB 37.6 billion. By the end of 2017, the renminbi-denominated deposit balance of Zibo's financial institutions totaled RMB 437.64 billion, and the balance of loans was RMB 299.96 billion.

IV. Zibo has advantages in the geographical location.

V. Zibo has advantages in urbanization and group structure.

The downtown area of Zibo is about 20 kilometers away from its neighboring counties. The urbanization rate of the city has reached 70.26%. With relatively complete functions, the city has a unique group-type urban structure and a spatial layout of urban and rural integration. The Municipal Party Committee and the Municipal Government have established the urban work ideas of "four in one, overall planning of group cities, and comprehensive integration", and accelerated the construction of modernized group-type large cities, which will provide mightiness power for the comprehensive development of urban and rural areas, integrated development of industries and cities, and harmonious development of urban industrial ecology.

VI. Zibo has advantages in the cultural heritage.

With a long and profound history with lots of cultural heritages, Zibo is the birthplace of Qi culture, as well as the origin of the world soccer, known as the cultural tradition of "rule of law, openness, tolerance, focusing on business and industry". Zibo was hailed as the "dry dock" and has the cultural connotation of kindness, righteousness, and integrity. These excellent traditional cultures can be transformed into an endogenous driving force for promoting reform and development, as well as translated into hard power by planning and developing a number of high-end cultural projects.

VII. Zibo has advantages in the park carrier.

Zibo City has developed 15 key industrial parks, including one national high-tech industrial development zone and 10 provincial economic development zones. Zibo owns Zibo Bonded Logistics Center (Type B) and has already opened the "Zibo" China-Europe International Freight Train, which has built a bridge for the city to deeply integrate into "the Belt and Road" initiative and create a new open economy advantage.

VIII. Zibo has advantages in the business environment.

Zibo City has deeply promoted the least administrative approvals, the highest administrative efficiency, and the lowest administrative costs, and deepened the reform for the "simplification of administrative procedures, the combination of decentralization and control, and the optimization of services". As a result, the municipal administrative examination and approval items and charging items are reduced to 124 and 19 respectively, and more than 90% of municipal approvals can be done by zero or one time of on-site visit. In terms of in-depth reform of the commercial system, market entities in the city have exceeded 400,000, a year-on-year increase of 17.7%, as of the end of March, 2018.

In recent years, the Municipal Party Committee and the Municipal Government have formulated a series of policies and measures for developing the real economy, speeding up the transition to new from old economic engines and promoting transformational development. In particular, in 2017, Opinions on Further Strengthening Investment Promotion and Several Measures for Further Promoting the Priority Development of Talents ("Zibo 23 New Talent Policies") were issued.