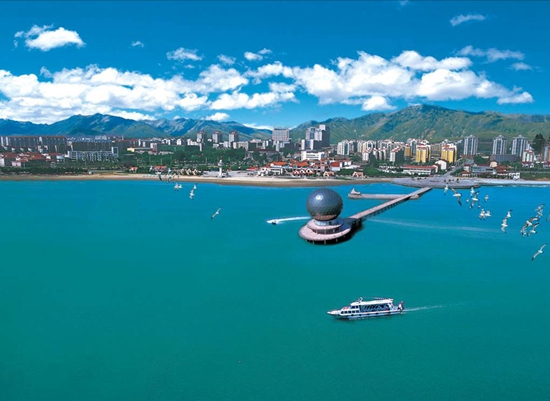 Yantai is located in the east of Shandong Peninsula, bordering the Yellow Sea and the Bohai Sea, and facing the Liaodong Peninsula, Japan and Korea across the sea. With a land area of 13,900 square kilometers and a resident population of 7.09 million, it is an important city in the Circum-Bohai Sea Economic Zone and the transportation and logistics hub connecting the Beijing-Tianjin Economic Zone, the Yangtze River Delta and the Northeast Asia Economic Zone, as well as a gateway city for communication between Japan and South Korea. It ranks 5th among the most suitable cities for developing logistics in China published by Forbes.

Yantai port is one of China's top 10 ports. With ninety-five 10,000-ton berths and a maximum depth of 20 m, it navigates to more than 100 ports in more than 70 countries and regions around the world. The Yantai-Dalian railway ferry is the first maritime railway ferry of more than 100 kilometers in China, which shortens the distance from Northeast China to Shandong Province and eastern coastal areas by 1,600 kilometers. Yantai Penglai International Airport is a national first-class open port. It is directly connected to nearly 70 cities at home and abroad, and the number of routes ranks among the top in the country. There are 19,000 kilometers of domestic highways in Yantai, including 558 kilometers of expressways, and Shenyang-Haikou, Rongcheng-Wuhai, Weihai-Qingdao expressways run through Yantai. Railways in Yantai are connected with the main trunk line of the whole country, and the Qingdao-Weihai-Rongcheng intercity railway has realized the one-hour working circle of the three cities, and the bullet train can directly reach Beijing, Shanghai and Jinan. The cross-sea passage of Bohai Strait from Yantai to Dalian has been included in the national plan. After the completion, the barrier across the Bohai Sea between Liaodong Peninsula and Shandong Peninsula will be eliminated, and it will only take one hour from Yantai to Dalian.

Around the construction of power city of manufacturing industry, Yantai makes the plan of "chain casting" with the connotation of "chain extension, chain supplementing, chain enhancement and chain cultivation", carries out the transformation and upgrading of the traditional industries, breaks through the development of the emerging industries, expands and highlights the characteristic industries, thereby building a several industrial cluster at the hundred billion level.

Yantai, with a long history, is one of cultural birthplaces in early ancient China. According to research, there have been human beings live and multiply here as early as Late Pleistocene (10000 years ago). It is the residence of Dongyi people. Dongyi people founded a state here in the Xia Dynasty. during the Shang Dynasty, Western Zhou Dynasty and Spring and Autumn Period, it was owned by Lai d. It was under Qi state during the Warring States Period and under Qi Prefecture in the Qin Dynasty, and was called Donglai Prefecture in the Han Dynasty, Donglai State in the Jin Dynasty, Donglai and Changguang Prefecture in the Northern and Southern Dynasties, Laizhou in the Sui Dynasty, TengChow and Laichau in the Tang-Song-Yuan Dynasties and TengChow Fu and Laichau Fu in Ming and Qing Dynasties. In 1398 AD (the 31st year during Hongwu period of Ming Dynasty), the Ming Government built Qishan Defense Station here for strengthening the coastal defense, which is the earliest prototype of Yantai. A beacon tower, also called the "fire beacon", was built in Beishan, so that Yantai was named after it. In 1858 AD (the 8th year during the Xianfeng period of Qing dynasty), the Qing Government signed the Treaty of Tianjin with Britain, France and other countries about opening up Tengchow as the treaty port. In 1861, it was changed to be Yantai. Then, 17 countries, including Britain, France, and the U.S., established consulates in Yantai successively. After the founding of People's Republic of China, Wendeng Prefecture, Laiyang Prefecture and Yantai under province were established in 1950, Yantai Prefecture was established in 1958, and Yantai City at prefecture level was established in Nov. 1983.

Yantai is a place endowed with the fine spirits of the universe and producing many outstanding people. With a wealthy land, Yantai people are full of confidence and tolerance, and they create the eyeable culture and art with their wisdom and hard work. Yantai is the famous "Hometown of Peking Opera" and "Hometown of Athletics" in China. Its 14 projects, including the "legend about the eight immortals crossing the sea" are included in the list of national intangible cultural heritage, and Haiyang Yangko Dance also walks from the countryside to the opening ceremony of Beijing Olympic Games. Yantai wins the "National Civilized City" for five consecutive times, wins the "National Outstanding City for Overall Control of Social Order" (Changan Cup) for seven consecutive times, and receives many honors such as "UN Habitat Award", "China Habitat Environment Prize", "China Top Ten Cities in Living Quality", "China Top Ten Leisure Cities", etc. More than 100 thousand foreign merchants and their family member as well as their enterprises settle down in Yantai, starting up a business here and living here.

Embraced by mountains and seas, Yantai has a charming sight, four distinctive seasons, beautiful and gorgeous scenery. With the beautiful and livable ecological environment, it is a coastal landscape city with the spirit of the times. With the vast blue seas and sky, golden sunshine beaches, magical islands, ethereal Penglai Pavilion, fantastic mirage, boundless grape gallery and hot spring spreading all over the place, Yantai wins the honor of "Mountain and Sea Fairyland·City of Wine". With the fine rate of air quality of 80% and forest coverage rate of 43.6%, Yantai is the famous summer resort. At present, it has 85 Grade-A tourist attractions.

Yantai has rich marine fishery resources, abounds in sea cucumber, prawn, abalone, scallop and other marine products, and has more than 200 offshore fishery species, including more than 100 species with fishing value. This makes it the national important fishery base. Yantai is the famous place of production of fruits in Northern China, and its native products enjoy a good reputation both at home and abroad. Eight products including Yantai wine, apple, large cherry, sea cucumber and others are the national protected products of geographical indication. Nineteen products including Yantai apple, Laiyang pear, Yantai large cherry, Laizhou swimming crab and others win the certification marks of national geographical indication. Economic indicators of underground mineral resources

Yantai is one of the birthplaces of modern national industry in China. So far, the city has developed a complete range of industries and strong industrial supporting capabilities. The leading industries, including the electronic information, food processing, nonferrous and precious metal processing, high-end chemical industry new materials, equipment manufacturing, automobile manufacturing, and pharmaceutical health, are all developing well. Emerging industries such as nuclear power equipment, artificial intelligence, and virtual reality are all growing rapidly. In 2017, the main business incomes of the industries above designated size of the whole city achieved RMB 1.4 trillion, accounting for 9.8% of the province, with profits of RMB 104.3 billion, accounting for 12.5% of the province, ranking first in the province. There are 17 enterprises with assets of several hundred billion-yuan in the city, accounting for 12% of the province; 43 listed companies in the industrial sector and 12 provincial-level manufacturing single champion enterprises, both ranking first in the province. According to incomplete statistics, Yantai has 57 products ranking first in the market share in the country. Wanhua, CIMC Raffles, Jerry, Nanshan and other enterprises have a leading level of innovation in the country and even the world, thus taking a place in the “Pillars of Great Powers”.