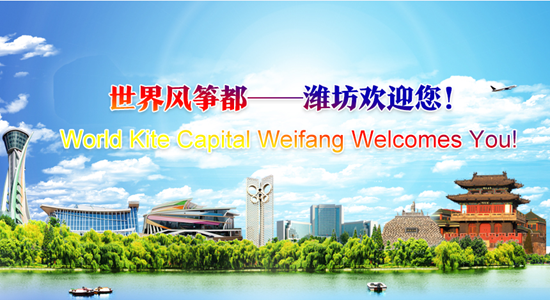 Weifang City, as an important regional central city of Shandong Peninsula and a major coastal city of Circum-Bohai-Sea belt, is the transport junction of Shandong Peninsula, with developed sea, land and air transport systems. Within the territory, there are 5 expressways and 8 railways, and Jinan- Qingdao High-speed Railway will open to the public in 2018, which makes it possible to arrive in Beijing in 2 hours and Shanghai in 3.5 hours. The projects such as Weifang-Laiyang High-speed Railway, Weifang-Rizhao Expressway, and Jinan-Qingdao Expressway Expansion will be accelerated and the city-coast rapid railway has been approved and commenced. In the long-term plan of national railway network, there will be five 350km/h high-speed railways across Weifang, and Beijing-Shanghai High-speed Railway will pass by Weifang. Thus, Weifang has been determined to be one of 100 national regional high-speed railway hub cities and one of 36 high-speed railway logistics hub cities. Weifang Harbor is the First Class Open Port and has started with the international container business. With the support of 35,000 dwt channel, the annual throughput has reached more than 42 million tons. The Belt and Road Weifang International Intermodal Transport Channel has been open to business. Weifang Airport has 14 domestic and international air routes, with annual passenger transport capacity of 600,000. Weifang Airport will soon be relocated.

Weifang is the pioneer of the national modern agriculture industry, important equipment manufacturing base in the country and the provincial advanced city in the development of service industry.

Water: In the territory of Weifang City, there are more than 110 rivers, including Weihe River, Mihe River, Bailanghe River, etc., which provide abundant water resource for the economic and social development of Weifang.

Faithful Weifang and Quality Weifang have become the honorable name cards of the City. The clean and neat environment, convenient traffic, abundant education resource, thorough medical service and colorful cultural life, with its four distinctive seasons, pleasant climate, and its open and harmonious atmosphere have made Weifang City a modern dynamic city, suitable to live and doing business. The population urbanization rate of the city is 60%. The 35.5% forest-cover rate makes it the national forest city. The water quality is 100% conformed to the standard of water sources in urban area, and the 100% harmless treatment rate of household waste can be realized. The number of “blue sky and shining star” days reaches more than 270. The 60% proportion of new energy bus makes it one of national transit-oriented cities. Smart city cloud platform of "Weifang V" has been established.

Education: Weifang City has 19 higher learning institutions of various types, including 5 undergraduate colleges and universities, and 14 vocational colleges at the specialized level. There are 178,000 full-time students and 136,00 faculty members.

As a renowned cultural city, Weifang City has a long history and a galaxy of talents. Shun Emperor of "Three Emperors and Five Sovereigns" in ancient China, Cang Jie (the inventor of Chinese characters), Zheng Xuan (Master of Confucian classics), Jia Sixie (saint in agriculture), Zhang Zeduan (painter of North Song Dynasty), Liu Yong (grand secretary of Qing Dynasty), Mo Yan (the first Nobel Prize winner in China) are all celebrities of Weifang. Scenic spots and historical sites such as Shihu Garden established in Ming Dynasty, Shanwang Fossil of 18 million years ago, the world's largest scale of dinosaur fossil, stone Buddha statue of Sui and Tang Dynasty, ancient volcanic cluster, and Weifang kite, Yangjiabu wood board new year picture, gold and silver inlaid lacquer, Gaomi flutter gray new year picture, paper cuttings, and clay figurines all have abundant cultural and historic features and have been rated as the intangible cultural heritages at the national level. There are 97 A-Class tourist attractions and 50 star grade hotels in the city. In 2017, the total tourist consumption was RMB 78 billion. Weifang City is accelerating the building of "Famous Cultural City", promoting the establishment of brands, such as national historical and cultural city, the hometown of arts and crafts and folk arts to be rated by the United Nations, famous Chinese calligraphy city, as well as building cultural industry park and characteristic cultural town, and setting about the construction of museum groups and gallery groups, so as to promote the development of cultural tourism, rural tourism, industrial tourism and eco-tourism, and create all-for-one tourism brands.

Foreign cooperation: Weifang vigorously implemented its internationalization strategy and has established economic and trade cooperation with more than 210 countries and regions. It has also established friendly and cooperative relations with 36 cities in 15 countries, including Japan, South Korea, Germany and the United States. Companies from more than 80 countries and regions have invested in Weifang, and nearly 100 of them are companies in the list of Fortune 500. More than 50 companies of Weifang have invested abroad. Weifang strives to develop festival economy, each year, it hosts a series of festivals such as International Kite Festival, Lutai Economic and Trade Fair, China-Japan-Korea Industrial Expo, International Vegetable Science and Technology Expo, International Gem Expo, Chinese Painting Festival, Chinese Culture Exhibition and Flower Fair to attract domestic and foreign businessmen come to Weifang for economic and cultural exchanges.

It vigorously implements the pilot innovation industry team introduction and cultivation plan, further promotes mass entrepreneurship and innovation, builds innovative cities and model cities for entrepreneurship, and promotes the establishment of the national intellectual property city and the construction of the intellectual property protection center. It is implementing the recruitment program of global experts and the domestic high-level talent gathering project, introducing the national “The Recruitment Program of Global Experts" and Taishan industry leading innovative talents. It strives to implement the plan for attracting investment to build colleges or attracting colleges to build branches in Weifang, and builds science and education innovation parks. Weifang people who work outside are also encouraged to return for entrepreneurship.

Weifang has more than 150 development zones at the national and provincial levels and key industrial parks with complete infrastructure and preferential policies. These zones and parks are an important carrier for foreign cooperation.