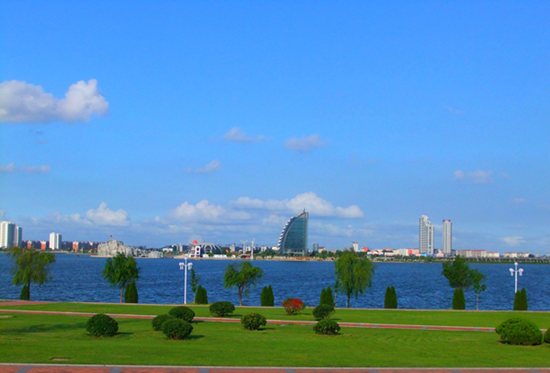 Linyi is in the southeast of Shandong Province and administers 3 districts, 9 counties and 3 development zones whose total area is 17,200km2 and population reaches 10.86 million and it is the city with the largest area and the largest population in Shandong Province. In 2017, the basic situation of improving quality and efficiency and tending to a good prospect from stability happened to economy and society of Linyi. The GDP of the whole city was RMB 434.539 billion with an increase of 7.9%.

Linyi is in the strategic location of New Eurasian Land Bridge tower and at the junction of two economic circles-"Yangtze River Delta" and "Circum-Bohai-Sea", adjoins to the sea in the east, approaches to Central Plains in the west and belongs to strong radiation area of the port. Linyi is a main hub city of national transportation where "one airport, two railways and four expressways" exist. The airport is in possession of more than 20 opened airlines directly reaching to 18 cities such as Beijing, Shanghai, Guangzhou, Shenzhen, Dalian and Yiwu. On Jun. 28, 2015, ceremony of Linyi Airport temporary opening and first flight of Korean flight was held and the first international airline of Linyi Airport was officially opened. Yanzhou-Shijiusuo Railway connects with Port of Rizhao in the east and Beijing-Shanghai Railway in the west. Coastal thoroughfare-Jiaoxin Railway runs from north to south. Rizhao-Dongming Expressway and Liny-Zaozhuang Expressway runs from east to west as well as Beijing-Shanghai Expressway and Changchun-Shenzhen Expressway runs from north to south. Traffic mileages of road and railway reach 24,000 km and 518 km, respectively with relatively perfect armed three-dimensional transport system formed.

There are many high-quality mineral resources such as iron, titanium, gold and geothermal energy in Linyi and 82 kinds of mineral resources whose reserves have been verified and discovered. Reserves of dolomite, diamond, silica sand and plaster are among the top two reserves nationwide. Fresh water resource accounts for 1/6 of that in Shandong Province and Linyi is "China Geothermal City" and "Hot Spring City in China". Linyi is in possession of 6 million mu (4000km2)commodity grain base, 1 million mu (about 666.7km2) high-quality peanut base, 1 million mu efficient vegetable base and 1 million mu high-quality fruit base where "ecological Yimeng Mountain and high-quality agricultural product" brand enjoys good fame nationwide. There are more than 0.3 million students in regular institutions of higher learning and vocational colleges in Linyi which can provide sufficient talents for investors. There are more than 190 various financial institutions with the number of banks and security and futures institutions occupying the front rank in Shandong Province. Sufficient private capital and active financial innovation arise in Linyin which is one of the first batch of pilot cities of private financing standardized guidance.

Linyi is a famous wholesales market in China. Linyi is a large logistics city where there are more than 8000 loading vehicles for freight transport to all parts of the country. Its logistics network covers all county-level and above cities nationwide, reaching to all ports nationwide. The logistics cost is 30% lower than national average level.

Linyi has two national level development zones, Linyi High and New Tech Development Zone and Linyi Economic and Technological Development Area, and 12 provincial development areas. It is one of cities with the least items requiring administrative approval, the shortest time spent and lowest price in Shandong Province. Itis chosen as "Chinese city with the most investment potential in the opinion of transnational corporations", achieves with glory of the top candidate in China's urban competitiveness government efficiency list published by World Bank and is selected as one of the most valuable ten cities in China and one of the best commercial cities in Chinese Mainland published by Forbes. Linyi successfully wins the titles of National Civilized City, Chinese Outstanding Tourism City, National Garden City, National Model City for Environmental Protection, National Sanitary City and Top Ten Cities for Green Economy in China. According to "China's Economic Life Survey 2012-2013", released by CCTV (China Central Television), Linyi was selected as one of the top 10 happiest prefecture cities.