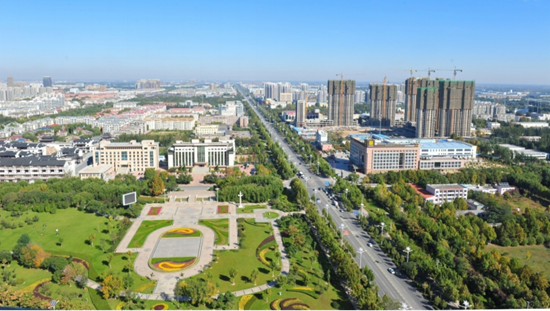 Located in the northwest of Shandong Province and the north of the lower reaches of the Yellow River, Dezhou City falls between E 115°45′ - 117°36′, and N 36°24′25″ - 38°0′32″. In the north, Dezhou borders on Zhangweixin River and neighbors Cangzhou City of Hebei Province; in the west, it borders on Weiyun River and neighbors Hengshui City of Hebei Province; in the southwest, it borders on Liaocheng; in the south, it is separated by the Yellow River from Jinan City; in the east, Dezhou borders on Binzhou. Dezhou is 320km from the capital Beijing, and its territory boasts 200 kilometers wide from east to west, 175 kilometers long from north to south, with a total area of 10,356 square kilometers, accounting for 7.55% of the total area of Shandong Province. Dezhou is located at the intersection of Beijing-Shanghai Railway and Dezhou-Shijiazhuang Railway. Beijing-Shanghai Expressway, Qingdao-Yinchuan Expressway, Dezhou-Shijiazhuang Expressway and Beijing-Hangzhou Canal go across the region. No. 104, No. 308 and No. 205 National Highway pass through the territory. Besides, Beijing-Shanghai High Speed Railway, Dezhou-Yantai Railway, Dezhou-Shangqiu, Dezhou-Binzhou Expressway are under construction, so the regional traffic superiority is prominent. In 2006, Dezhou was identified as the main transportation hub of the country.

Overview of the economics

At present, Dezhou has 2 state-level and 11 province-level development zones. It has built an ecological science and technology city of 150 square kilometers with the basic conditions to undertake the transfer of international and domestic industries. And it is building a leading economic innovation zone in the Bohai Rim region, a modern industrial agglomeration area, an ecological chicken coop demonstration area and an opening-up leading area. Rich in human resources, it is named as the "Training Base for Skilled and Urgently-needed Talents in Manufacturing and Modern Service Industry" by Ministry of Education, Ministry of Transport and four other ministries and commissions. It is the only experimental area for the innovation and development of vocational education in Shandong Province. At present, Dezhou has 4 universities and 35 secondary and higher vocational education schools, which train more than 200,000 middle and senior talents and over 1 million transferable industrial labor forces annually.