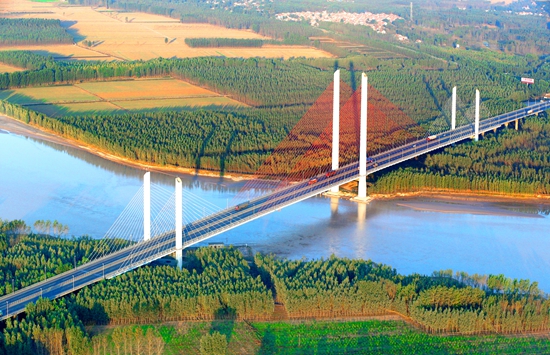 Binzhou is the hometown of the battle saint - Sun Tzu. It is also the old revolutionary zone of Bohai Sea, which is located in the overlapped zone of "two zones and two circles", namely, High-efficient Ecological Economic Zone of the Yellow River Delta, the Blue Economic Zone of Shandong Peninsula, Bohai Economic Circle and Jinan Provincial Metropolis Circle. It is the north gate of Shandong Province. In 2000, the district was cancelled and it was updated to a city level. There are 9,600 square kilometers of territory and a population of 3.8 million under the jurisdiction. It contains five counties and two districts (Bincheng District, Zhanhua District, Huimin, Yangxin, Wudi, Boxing, Zouping) and Binzhou (State-level) Economic and Technological Development Area, Zouping (State-level) Economic and Technological Development Area, Yellow River Delta (Binzhou) National Agricultural Science and Technology Park, Binzhou High-tech Industry Development Zone and Beihai Economic Development Zone. It is the largest administrative region in the Yellow River Delta region.

Binzhou is located in the hinterland of the Yellow River Delta and the southwest coast of Bohai Bay. There are 9,600 square kilometers of territory under the jurisdiction. It contains five counties and two districts (Bincheng District, Zhanhua District, Huimin, Yangxin, Wudi, Boxing, Zouping) and Binzhou Economic and Technological Development Area, High-tech Zone and Beihai Economic Development Zone. The total population of the city is 3.87 million. It belongs to East Asia warm temperate sub-humid continental monsoon climate with four distinctive seasons. Binzhou borders on mountain in the south and sea in the north. The Yellow River runs through the city in the middle. It is the largest and most populous administrative region and core area in the Yellow River Delta. It is located in the overlapped area of High-efficient Ecological Economic Zone of the Yellow River Delta, the Blue Economic Zone of Shandong Peninsula, Bohai Economic Circle and the economic circle of Jinan Province capital city group. It is the north gate of Shandong Province.

Binzhou is rich in natural resources and is the main oil producing area of Shengli Oilfield - the second largest oilfield in China. The city has 29 kinds of proven mineral resources with huge development potential. Binzhou, with a 240-kilometer coastline, is one of the four largest fishing grounds in China. There are 100,000 hectares of tidal flats and vast reed wetlands along the coast. Binzhou is an important raw salt production base, salt chemical base and marine aquaculture base in Shandong Province.

Binzhou has a long history and culture, and is one of the birthplaces of Yellow River culture and Qi culture. Sun Wu, a famous ancient military thinker, Fan Zhongyan, a famous politician in Song Dynasty, and Dong Yong, a dutiful son in Han Dynasty were born or grew here. There are over 250 scenic spots and historical sites, such as Weishi Manor, Ancestral Hall of Fan Zhongyan, Zhangba Buddha, Former Residence of Du Shoutian, Da Wenkou and Longshan Ancient Cultural Relic, etc.

Opening to the outside

Binzhou has established economic and trade cooperation with more than 160 countries and regions. There are more than 60 foreign-invested enterprises in the city in total. 28 top-500 enterprises have invested and developed in Binzhou, such as Itochu, China Resources (Holdings) Co., Ltd., AKZO Nobel, etc. Binzhou has 16 domestic and foreign listed companies, and has formed "Binzhou plate" in the main board of the Hong Kong Stock Exchange. After Shandong Weiqiao Pioneering Group was listed in Hong Kong on Sep. 24, 2003, Xiwang Group, Hongcheng Holdings, Sanxing Grease, Huaxing Machinery, Hongqiao Group and other enterprises have subsequently listed in foreign countries. At the end of 2016, the cumulative financing amount of overseas listing was RMB 35.9 billion, ranking the first in the province.