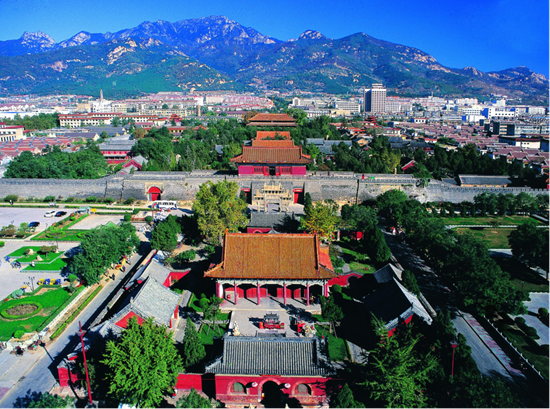 Mount Tai culture - with a long history and splendid culture, Mount Tai is known as "A Holy Mountain in China” and “Symbol of the Chinese National Spirit” with “Mount Tai Culture” of strong local characteristics and extensive influence.

Regional advantages - as an important city in the economic circle of Shandong Province’s capital city group, Tai'an is located in the central zone of Circum-Bohai Sea Economic Zone and Yangtze River Delta Economic Zone, and is an important transport hub and logistics center in the east of China. Tai'an is 80km from Jinan International Airport. It takes only one hour from Tai'An by the expressway; Tai'an Station is set along Beijing-Shanghai High-speed Railway. It takes 2 hours to reach Beijing and 3 hours to reach Shanghai; the expressway runs through the whole city. It takes 6 hours or less to reach Beijing, Shanghai, Tianjin, Nanjing, Zhengzhou and other important cities; with the convenient transportation, it is 300km and 280km from Qingdao Port and Rizhao Port respectively.

Resource overview - with abundant mineral resources, Tai'an is an important base of energy and raw materials in Shandong Province. There are more than 60 kinds of proven mineral resources and 50 billion tons of recoverable deposits. Of those, the sulfur reserve ranks the first in Asia and the gypsum reserve ranks the first in the whole country; With sufficient human resources, Tai'an has 14 universities and colleges (Shandong Agricultural University, Shandong University of Science and Technology, Taishan Medical University, etc.) and over 20 scientific research units. There are more than 200,000 students at school, providing a large number of high-quality talents.

Ecological environment - The whole city has six natural reserves where the forest coverage rate reaches 39.6% and the greening coverage rate in the built-up areas reaches 45.9%. The city was rated as the National Forest City in 2015. The annual good rate of air index reaches 69%, ranking the first in the inland cities of Shandong Province. The urban water mainly comes from the surface water of Mount Tai from which the water quality is excellent without pollution. With perfect infrastructures, livable and harmonious ecological environment, the main indexes of "water quality, air quality, landscape level, urban landscape" in Tai'an reach the standard of livable cities.